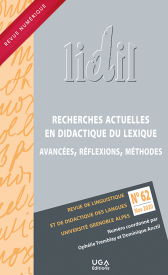 Volumen monográfico: Languages for Specific and Academic Purposes as an object of instruction: resources, methods and didactic transposition

Guest Editors for this special issue:

“Languages for specific and academic purposes” (use of the plural because the singular does not allow for the diversity of fields to be considered) are also at the heart of applied linguistics, whether in specialised courses where the teaching of foreign languages is directly linked to the disciplines, or in the LANSAD[1] sector (languages for specialists in other disciplines). The professionalisation of university courses and the focus on the learner and his or her needs leads to a need for language teaching geared towards specialised language use.

Research in the field of teaching languages and cultures for specific and academic purposes involves a series of stages, including: the definition of languages, domains and communities of specialisation, the characterisation of languages for specific purposes (LSP), the methodical description of the different aspects of LSP & LAP and, finally, didactic transposition (Van der Yeught, 2016). The first three stages of the process of describing LSP look at how members of a community use specific language in their communication, discourse and culture. However, since the ultimate aim is to teach LSP to learners, it must also be described as a competence.

The focus of this special issue is more specifically on this second point, which leads us to address LSP & LAP from the point of view of creating resources, modelling data for analysis with a view to teaching, and didactic transposition. Didactic transposition can be seen as a process in which a “subject material” is transformed into “teaching materials” (following institutional acclimatisation) and finally becomes a “teaching materials” when the original material has been prepared for teaching. Thus, any such transformation implies a change of domain by the passage from “familiar matter” to “teaching materials” (Chevallard 1985: 20). These three themes are the focus of this issue, which aims to provide a portrait of current research contributing to the development of a didactic approach to languages and cultures of specialisation, and to facilitate exchanges between teacher-researchers from different linguistic and cultural areas (English, Spanish, French, German, Italian, etc.). Contributions should be in line with one of the proposed themes and answer one of the questions raised.

The creation of resources in LSP & LAP is often a prerequisite for linguistic analysis and modelling and for use in teaching. Here we consider a learning resource to be an entity, digital or otherwise, used in a teaching, training or learning process. The transition from data (in the broadest sense) to resources has been questioned by courseware specialists (see in particular Mangiante & Cavalla 2016). Linguists and courseware specialists often come up against a lack of previously existing resources, and even when such resources do exist, they are not necessarily adapted to the linguistic and teaching objectives being pursued. In this context, the resources to be developed involve the collection of data (written, oral and multimodal) through the implementation of methods derived from automatic language processing and/or collection instruments - field surveys, questionnaires, interviews (Divoux 2017; Bert et al. 2010).

The following are examples of questions that could be addressed by papers submitted under this theme:

-  What modes of data collection can be used for the study of LSP & LAP?

-  How can data collection be integrated, defined and optimised according to different teaching aims?

-  How to deal with the constraints linked to the exploitation of data collected (e.g. copyright issues)?

-  What are the selection criteria to guarantee reliability of the data?

There are many different approaches to methods of analysis in LSP & LAP. They may relate to the analysis of interactional discourse (Cicurel & Doury, 2001; Mercelot, 2006; Alvarez Martinez, 2018), the analysis of specialised discourse based on an utterer-centered approach (Fløttum et al. 2006) or in the light of professional practices (Mourlhon-Dallies, 2008).

Methods can also focus on syntax, lexicon or phraseology, as illustrated by studies on the transdisciplinary scientific lexicon, a gender lexicon specific to scientific discourse (Jacques & Tutin, 2018). Finally, terminology is also concerned by these questions, whether in an approach based on textual exploration (Condamines, 2018; Cabré & Vidal 2004) or from a more cognitive perspective (Faber 2009; 2012).

In the field of French as a foreign language (FFL), in French for specific purposes (FSP) and in French for academic purposes (FAP), the analysis of the data collected concerns both linguistic and discursive aspects, with a view to defining the content to be taught (Mangiante & Parpette, 2004 and 2011).

Research in LSP & LAP illustrates the diversity and complementarity of approaches (Van Der Yeught, 2016a; Gledhill & Kübler 2016) and in the Spanish-speaking world, the strong demand for training in LSP & LAP has led to the emergence of work in the fields of corpus linguistics, terminology, lexicography and contrastive linguistics (Díaz Rodríguez, 2010; Pujol, 2018).

The following are examples of questions that could be answered by papers submitted under this theme:

-  What analysis methods and tools can be used to make better use of corpora in LSP & LAP?

-  What methods should be used to study the different modes of expression of a speciality in the language, i.e. linguistic, discursive and cultural?

LSP and LAP teaching resources and their analysis cannot be used in the classroom or in the digital learning environment as they stand. Indeed, in a constructivist approach to the teaching and learning of LSP & LAP, didactic transposition (Chevallard, 1985: 20) of what is to be taught (here, the specialised varieties of the different languages described by linguists) into teaching materials to enable the learner to construct his or her knowledge through interactions with the materials in order to appropriate them (Van der Yeught, 2016: 10). LSP & LAP need to be described in terms of competences if they are to be transmitted to learners.

In this context, the aim of this theme is to provide ideas on how to transpose LSP & LAP into teaching materials, considering the linguistic, discursive and cultural characteristics of LSP & LAP as well as the institutional framework (Foreign languages, applied foreign languages, languages for specialists of other disciplines, centres for teaching French as a foreign language, etc.) in which the LSP is taught. Translating LSP & LAP into teaching materials necessarily leads us to question the priorities to be established, the adaptations to be considered, the constraints to be considered, the needs and expectations of learners, the necessary mediation, etc. Although LSP & LAP specialists rely on their knowledge of (general) applied linguistics, one of the particularities of applied linguistics in LSP & LAP is to characterise the relationship between the teaching and learning of LSP & LAP and the language under consideration.

The following are examples of questions, which could be answered by articles submitted under this heading:

- How can subject matter be transposed through the description of the LSP & LAP into teaching materials?

- How can the learner be helped to appropriate the subject matter (specialised language) by organising and prioritising it according to his/her prior knowledge, including knowledge of the LSP & LAP in their first year of a bachelor’s degree?

- What activities can be designed in LSP using the data collected?

- What is the position of the teacher in the process of didactic transposition in LSP & LAP?

Notification of acceptance or rejection of submissions: 1 March 2021

Publication of the issue: June 2022

Abstracts and papers should be sent to the following two addresses:

- Abstract submissions should not exceed three pages (including bibliography);

- In no case should full papers exceed 40,000 characters, including spaces;

- Articles may be written in French, English or Spanish. The final version of the article should include an abstract in English if it is written in another language;

- The stylesheet and instructions for authors can be found at the following address: