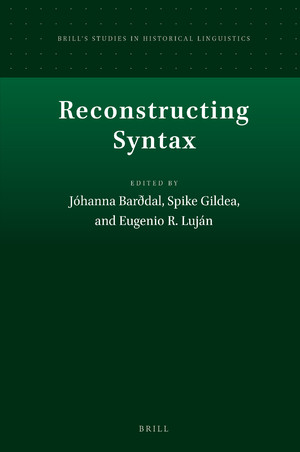 The present volume contributes to two of these issues in detail; first the issue of reliably identifying cognates in syntax and second, the issue of directionality in syntactic change. A systematic program is suggested for identifying cognates in syntax, which by definition is a different enterprise from identifying cognates in phonology or morphology. Examples are given from several different language families: Indo-European, Semitic, Austronesian, Jê, Cariban, and Chibchan. Regarding the issue of directionality for syntactic reconstruction, most of the studies in this volume also demonstrate how local directionality may be identified with the aid of different types of morphosyntactic flags, particularly showcased with examples from Chibchan, Semitic, and various Indo-European languages.

7 Voice, Transitivity and Tense/Aspect: Directionality of Change in Indo-European (Evidence from Greek and Vedic)
Nikolaos Lavidas and Leonid Kulikov

8 On Shared Structural Innovations: the Diachrony of Adverbial Subordination in Semitic
Na’ama Pat-El