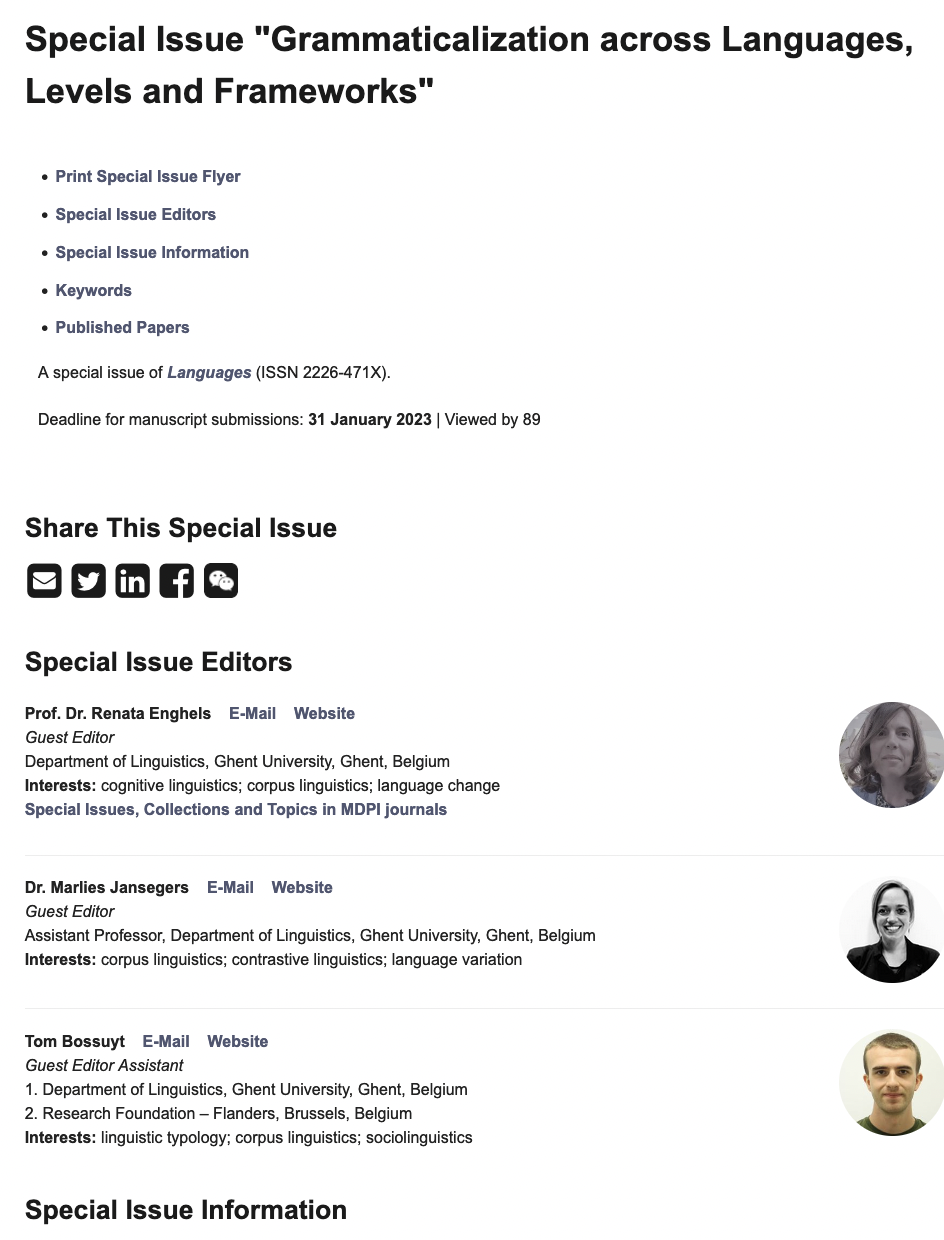 Over the last few decades, we have witnessed a proliferation of studies regarding phenomena such as grammaticalization, lexicalization and, more recently, constructionalization. According to their most basic definitions, these notions refer to different phenomena of language change which typically begin with a lexical form with a concrete meaning and end, respectively, in a grammatical unit or zero, a new lexical unit, or a fixed grammatical pattern or construction. Extensive bibliographies reflect ongoing discussions concerning every possible aspect of these linguistic processes, including basic terminology and their internal relationships. Yet, a common feature of grammaticalization theories is that they explain particular cases of changing grammar primarily as being a consequence of concrete language use. As a consequence, new knowledge regarding the nature of the phenomenon can best be gathered by closely studying particular phenomena in empirical data from different languages and incorporating insights from different frameworks.

Therefore, the main purpose of this Special Issue consists of reporting on new and current interests and developments in this well-established but continuously evolving research field.

First, the research field has experienced a surge in studies regarding different languages with different typological profiles and genealogical affiliations since the 1980s. Notable progress has been made in mapping out cross-linguistically recurring grammaticalization paths, leading to the proposal of several clines or hierarchies based on broad, comparative data. Nevertheless, the vast majority of studies are concerned with phenomena in particular languages, often based on ever-larger corpora. Somewhat unsurprisingly, most progress has been made by studying grammaticalization in those languages for which the most (historical) data are available, which tend to be European languages (e.g., Romance or Germanic). This does not detract, however, from the fact that the field has been diversifying. For example, since the turn of the century, an increasing amount of research has been conducted on grammaticalization phenomena in sign languages, which are otherwise underrepresented in the linguistic literature, and on the comparison of grammaticalization in spoken and signed languages.

Second, grammaticalization has been studied in relation to different levels of linguistic analysis. Originally, the first studies mainly focused on the (morpho)syntactic aspects of grammaticalization. As such, it was essentially conceived of as a morphosyntactic change in reduction. Other scholars, on the contrary, have highlighted not only the loss, but also the semantic gain involved in the process. More recent approaches even go beyond the level of (morpho)syntax and semantics and enter the realm of discourse in order to study grammaticalization in actual instances of spoken conversation and with relation to more general cognitive abilities involved in the speaker–addressee negotiation. Thus, both form and meaning are treated with equal weight, and meaning is understood in a broad sense to include not only lexical meaning but also discourse function, information structure, and other pragmatic phenomena.

Last but not least, knowledge on the nature of grammaticalization processes can further be refined by integrating new insights from appropriate theoretical frameworks. The idea of ‘emerging grammar’ (partially) explains why grammaticalization has mainly developed in parallel with the emergence and expansion of the cognitive and functional linguistics enterprise. Indeed, besides describing the formal paths of grammaticalization, researchers have been increasingly interested in the motivations behind these processes and the question of why these changes occurred. Hence, increasing attention has been paid to the functional meaning of grammaticalization, comprising different semantic and pragmatic accounts. From the beginning of the 21st century onwards, there have been proposals to study diachronic change from the perspective of construction grammar. However, most works on ‘constructionalization’ stipulate that it does not fundamentally differ from former grammaticalization studies, but that the advantage of this theory lies in its overarching approach to phenomena of lexical and grammatical change. Moreover, the introduction of the theoretical notion of construction has created the possibility of measuring with greater precision the gradualness of the grammatical change, including studies regarding productivity.

In short, we welcome a wide range of (relevant) topics, which may include but are not limited to:

Relevant papers regarding all languages from different frameworks are welcome.

Interested authors are requested to submit a proposed title and an abstract of around 500 words summarizing their intended contribution, prior to preparing their manuscripts. Abstracts will be reviewed by the guest editors and the journal's editorial team, and then full manuscripts will be solicited.

- Abstracts will be reviewed by the guest editors for the purposes of ensuring proper fit within the scope of the Special Issue. Full manuscripts will undergo double-blind peer-review.

Manuscripts should be submitted online at https://www.mdpi.com by registering and logging in to this website.  All submissions that pass pre-check are peer-reviewed. Accepted papers will be published continuously in the journal (as soon as accepted) and will be listed together on the special issue website. Submitted manuscripts should not have been published previously, nor be under consideration for publication elsewhere (except conference proceedings papers). All manuscripts are thoroughly refereed through a double-blind peer-review process. A guide for authors and other relevant information for submission of manuscripts is available on the Instructions for Authors page.

Please visit the Instructions for Authors page before submitting a manuscript.

The Article Processing Charge (APC) for publication in this open access journal is 1400 CHF (Swiss Francs). Submitted papers should be well formatted and use good English. Authors may use MDPI's English editing service prior to publication or during author revisions.