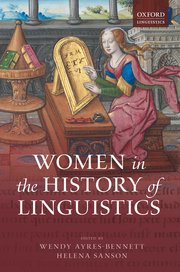 Women in the History of Linguistics is a ground-breaking investigation into women's contribution to the description, analysis, and codification of languages across a wide range of different linguistic and cultural traditions. Notably, the volume looks beyond Europe to Africa, Australia, Asia, and North America, offering a systematic and comparative approach to a subject that has not yet received the scholarly attention it deserves. In view of women's often limited educational opportunities in the past, their impact is examined not only within traditional and institutional contexts, but also in more domestic and less public realms. The chapters explore a variety of spheres of activity, including the production of grammars, dictionaries, philological studies, critical editions, and notes and reflections on the nature of language and writing systems, as well as women's contribution to the documentation and maintenance of indigenous languages, language teaching and acquisition methods, language debates, and language use and policy. Attitudes towards women's language-both positive and negative-that regularly shape linguistic description and analysis are explored, alongside metalinguistic texts specifically addressed to them as readers. Women in the History of Linguistics is intended for all scholars and students interested in the history of linguistics, women's studies, social and cultural history, and the intersection between language and gender.

3: Women as authors, audience, and authorities in the French tradition, Wendy Ayres-Bennett (University of Cambridge)

6: Women and the elaboration of a Russian language norm, Sylvie Archaimbault (Sorbonne University)

7: Women in the history of German language studies: 'That subtle influence for which women are best suited'?, Nicola McLelland (University of Nottingham)

10: British women's roles in the standardization and study of English, Carol Percy (University of Toronto)

11: The female quest for the Celtic tongues of Ireland, Scotland, and Wales, Bernhard Maier (University of Tübingen)

15: The history of the regulation and exploitation of women's speech and writing in Japan, Momoko Nakamura  (Kanto Gakuin University)

18: Women and the codification and stabilization of the Arabic language, Fatima Sadiqi (University of Fez)

19: European women and the description and teaching of African languages, Helma Pasch (University of Cologne)